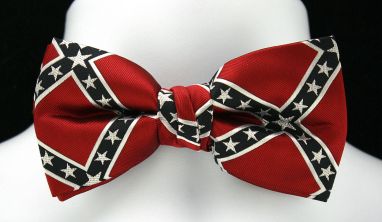 When I moved onto the sorority hall my junior year of college in South Carolina, I inherited from the previous room’s inhabitant something of an heirloom. It was one of those sturdy wood loft beds that double both your dorm space and your risk of falling out of bed drunk in the middle of the night.

This particular loft bed was coveted because the standard-issue beige had been painted white and decorated by the delicate, artistic hand of my sorority sister. Its posts were totem poles of femininity, with garlands of kites and pansies — our sorority’s symbols — and tiger paws — our school’s symbol — and other sophisticated doodlings. It also had a small, daintily painted Confederate flag.

The day I came into possession of the bed, one of my sorority sisters walked into my room, zeroed in on the flag and asked flatly, “You’re going to paint over that, right?” I mumbled something about how it didn’t really mean anything to me as a symbol so it didn’t matter one way or the other. The withering, give-me-a-fucking-break look she leveled at me shamed me into walking downtown to the store and getting a small cannister of paint. I covered it up later that week.

It’s time to at least deliver on what has to be the most belated, half-assed measure of decency and respect we can muster for this nation’s black citizens: Take down the flag representing an ideology rooted in ownership of their great-great-grandparents.

For some of you, the velocity of your knees jerking upward into your faces right now has left you writhing and howling on the floor so I will say loudly and slowly what apparently needs saying these days: Nobody is blaming you personally for slavery. I’m going to repeat that because you’re still making a lot of horrible noises down there. Again, nobody is blaming you personally for slavery. We’ve Googled it. We’re reasonably sure you weren’t there. You are still entitled to cold beer on a Friday night and a pair of jeans that fit just right.

(For the record, this week someone pretty smart pointed out that the same folks who feel the need to protest that slavery had nothing to do with them because it was 150 years ago seem to have no problem engaging in some time-and-space-transcending tongue kissing with the Founding Fathers of 239 years ago. But I digress.)

What people are asking you to acknowledge, some White People of 2015, is that slavery provided a disgusting introduction to this country for black people. Weird how that happens when they were forced here in chains and endured a holocaust en route and upon arrival. Before you cry foul on this assessment, keep in mind that you get genuinely upset when you check into a hotel room and it doesn’t match the online pictures. (Seriously, this is apparently such a widespread source of dude-rage that they based an entire commercial campaign on it.)

After slavery came more lynchings, systemic violence, Jim Crow, poverty, dogs and firehoses, separate and unequal education, mass incarceration, and every other pile of insane nonsense up to and including the inability to walk without disruption into their own damn houses some nights.

South Carolina Gov. Nikki Haley released a statement that she was simply baffled by the motive, even though it was already widely reported by credible news organizations that the massacre was motivated by hatred of black Americans. Fox News called it an attack on Christianity, and um, nothing else at all to see here so move it along and go buy some gold or something. And South Carolina’s Sen. Lindsey Graham urged us to blame only the killer; that there was no blame to set down at the base of the Confederate flag pole that was a rallying symbol for this homicidal degenerate and supremacist hate groups across the nation.

Now, I need to pause here and say that I used to intern for Senator Graham back when he was Representative Graham on the other side of Capitol Hill, and I was on the other side of the political spectrum. And these days when I drop that bit of personal history in the middle of a deep-blue cocktail party and I’m greeted with a wall of stinkface and a chorus of “WHAAA?s” I always say the same thing, with a shrug. “I used to be a Republican in college. It was a phase. I was experimenting. He’s a good man and his party doesn’t change that.”

That’s the thing. Senator Graham is a good man. So was the gentle, soft-spoken sorority sister who painted the Confederate flag on my loft bed as an artistic afterthought, not a political statement. So are most of the kids, parents, and teachers who every morning walk into public schools named for Confederate generals and whose mascots and banners carry these outdated symbols. For many in South Carolina and across the South in 2015, the flag is as innocuous a symbol as the Vineyard Vines whale.

That is a monumental problem.

The Confederate flag is a visual manifestation of horror and genocide for a lot of folks, so — and this is a hard concept for some White People of 2015 to grasp — those folks win.

It’s that simple. Their opinion and demand is paramount. Their pain and righteous rage and incredulity is more important than nebulous hurt feelfeels and nostalgia. (Also, some of you invoking the “heritage not hate” argument aren’t exactly Shelby Foote. Quick… name three Kardashians. Now, just as quickly name three key Confederate figures at the surrender at Appomattox. Exactly. Take a seat, Herodotus.)

Yet we’re living in a time of pathological opposition to the value of one idea over another. Stories about climate change, which 97 percent of published scientific research concludes is an actual thing, need to give equal time to the 3 percent that doesn’t. Everyone gets a trophy for trying in the marketplace of ideas. Fox News says “Fair and Balanced” with a straight face.

As Larry Willmore pointed out this week in taking on Fox’s insanely disingenuous coverage of the Emanuel AME Church massacre, when these types of atrocities happened in the 1960s, the country at least coughed up the unified admission that they were motivated by race and we had a serious problem on our hands. Today, we’ve got Fox dragging us to the mountaintop, but this time it’s Murdoch’s Bullshit Mountain.

In contrast, it was a positive sign to see Mitt Romney say this weekend that the Confederate flag needs to come down. It was a public step outside the confines his party has carved for itself and he didn’t have to take it.

This week, I heard my husband, a Texas native, talk about the first time he realized he needed to actually say something out loud when someone said something racist. To actually wake up, shake off the stupor of this most insidious form of white politesse and acknowledge it’s not enough to mumble and stare at our feet. It’s not enough anymore to sit in uncomfortable silence on a bus headed to a fraternity formal as some jackass is scream-singing a ditty about lynchings.

Most people won’t rally at a state house to take down the Confederate flag, as some did today in South Carolina. Most people will unfortunately have the opportunity to speak up to racism at work, at the bar, on the ballfield.

When I painted over the loft bed Confederate flag, I didn’t end racism. In fact I couldn’t even entirely eradicate that flag. Despite my best effort, some of the red remained murkily visible under the surface for the rest of the time I owned it. It was a  ridiculously small step. I’m embarrassed I needed someone else to tell me to take it.